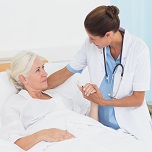 Verbal communication is considered the most effective way in which humans communicate feelings, experiences and views (Parahoo, 1997). This article captures the story of the family of a 95-year old patient who had been admitted to an acute trust, where he developed a pressure ulcer on the heel, alongside some moisturerelated damage on the buttocks. After being transferred to a local care home, he was re-admitted to the Emergency Department with sepsis and two unstageable pressure ulcers on his heel and sacrum, which he subsequently died from. The article outlines the impact and emotions family members felt during that time, which were recorded using open, unstructured, ad hoc interviews. The author allowed the family members to voice their feelings without prompting, collecting the information in a way that was comfortable to the family over several meetings. What follows is a reflective piece on the experiences and emotions felt about ‘a pressure ulcer in the family’ to help healthcare professionals gain a holistic view on the impact on family and caregivers.