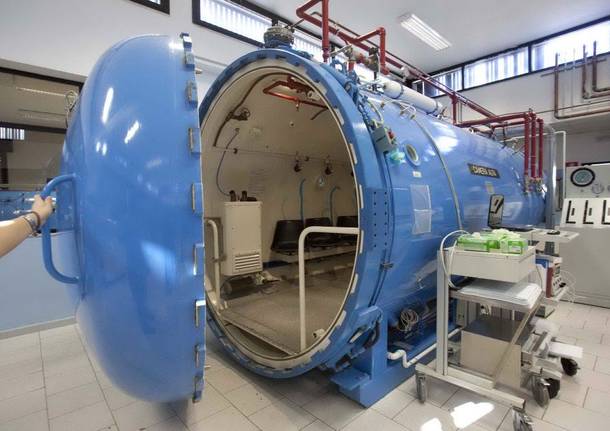 Hyperbaric oxygen therapy (HBOT) is an adjunctive treatment for patients with diabetic foot ulcers. The prolonged high oxygen level used in HBOT can produce oxidative stress, which may be harmful to the kidney. Animal experiments suggest HBOT does not harm renal function and may have an antiproteinuric effect, but little is known on the effect of HBOT in humans. We performed a retrospective chart review of 94 patients with diabetes mellitus who underwent HBOT at our institution over an eight-year period. Thirty-two patients had serum creatinine levels within 60 days of the start and the end of treatment. Creatinine levels were 1.41 ± 0.89 mg/dl before and 1.52 ± 1.17 mg/dl after hyperbaric treatments with no statistically significant difference (mean (postcreatinine + precreatinine/2) = 0.10 mg/dl, SE = 0.11, t = 0.89). Twenty-three patients had proteinuria measurements before and after HBOT mainly by urine dipstick analysis. A Wilcoxon signed-rank test showed less proteinuria after HBOT than before (N = 23, p=0.002). Proteinuria was absent in 7 of 23 patients (30%) before HBOT and 13 of 23 patients (57%) after HBOT, a reduction by almost 50%. This observation is remarkable because oxidative stress might be expected to increase rather than decrease proteinuria.